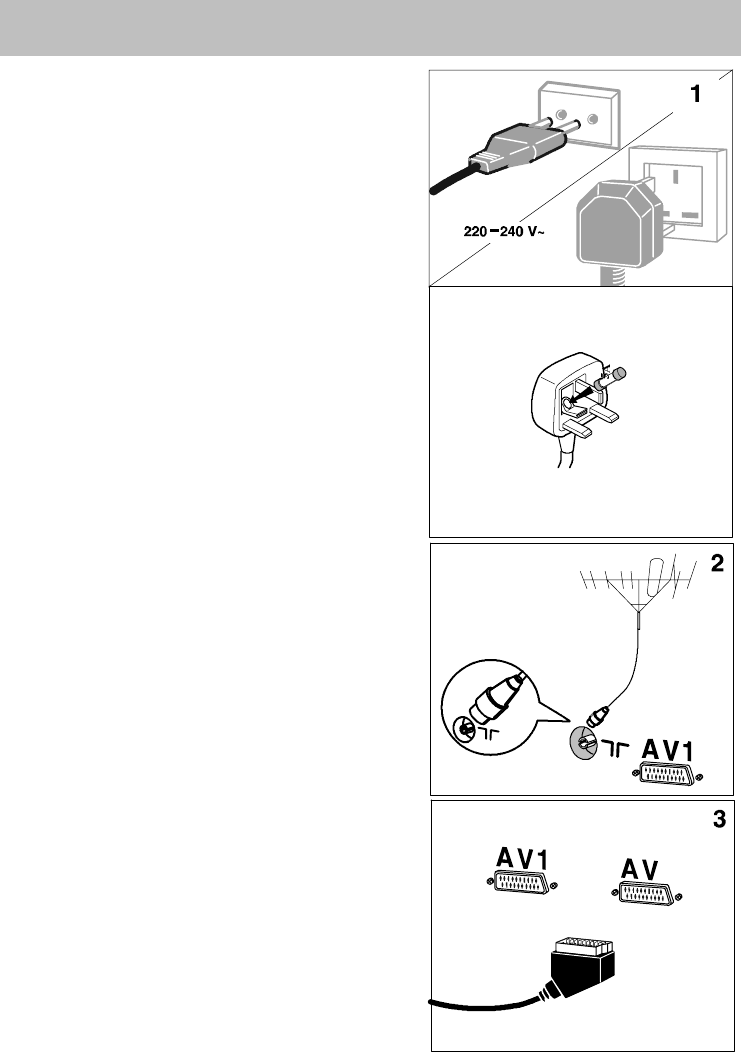 Continental
Europe
United Kingdom
The plug is fitted with a fuse which protects your
television.Ifyour televisiondoes not work,the fuse may
be blown.Inthis case,replace itwith anidentical5 Amp
ASTA orlr BSI(BS1362) certifiedfuse.
Note:the mains leadof your televisionis fittedwith a
mouldedplug. This leadcontains allthe safety equipment,
so you areadvised whenreplacing itnot to usea
non-specific commercially-available model.
2
Basic connections
3
Basicconn ection s
The mains plug (1) supplies power to the television. The
television must only be plugged in to a 220-240 V - 50 Hz
power supply. It must never be plugged in to a DC source. If
the plug comes away from the lead, never attempt to plug it
in: this could cause electrocution.
The aerial socket (2), located on therear ofthe television,can
be used to connect an external aerial or other appliance
equipped with a modulator such as a VCR, satellite receiver,
etc.
If you connect an appliance to the aerial jack, you must give
it a channel number. To do this, switch on the appliance, then
use the television to find the modulator channel (see the
appliance manual). Now give it a programme number and
memorise it (see Manual Programming of channels). Then,
when you wish to use the appliance, simply select its
programme number on the television. This procedure is not
required for VCR’s not equipped with a modulator.
The SCART socket AV1 (3), located on the rear of the
television, is intended to connect a VCR or a camcorder
(VHS, 8 mm), a Canal+ decoder, a video games console or
RGB-signal emitting appliances.
The SCART socket AV2 (3), located on the rear of the
television, is intended to connect a VCR or a camcorder
(VHS, 8 mm, S-VHS or Hi-8).
We strongly recommend the use of this type of connection,
which gives a better picture quality. To use the peripheral
appliance that you have connected, press the AVkey onyour
remote control (press once to select AV1; twice to select
AV2; three times for AV3: see ”Other Connections”). This
selection is automatic for some appliances. Pressing “”play”
on a VCR, or switching on a satellite receiver connected to
AV1 or AV2 will automatically switch on your television.
When you stop the VCR, if you have not changed channels
while watching the VCR, the television automatically
switches back to the channel you were watching beforehand.
If the television has been switched on from the VCR, it
switches to standby when the VCR is switched off. The
television automatically switches to 16/9 format if the
connected appliance delivers the corresponding signal.
previous next