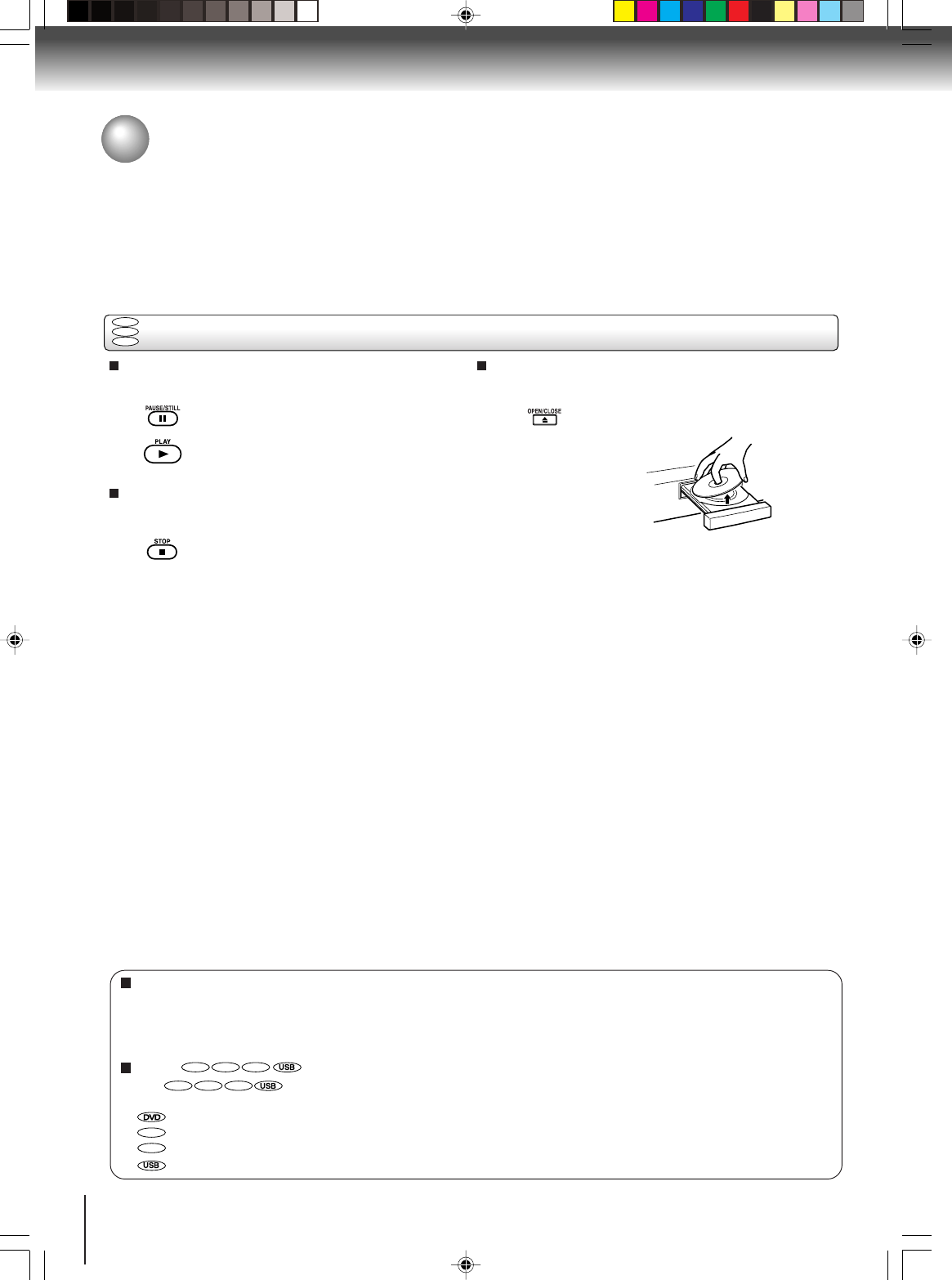 52
Basic playback (DVD)
To pause playback (still mode)
Press PAUSE/STILL during playback.
To resume normal playback, press
PLAY.
• The sound is muted during still
mode.
To stop playback
Press STOP.
To remove the disc
Press OPEN/CLOSE.
Remove the disc after the disc tray
opens completely.
Be sure to press OPEN/CLOSE to close the disc tray
after you remove the disc.
Notes:
• If a non-compatible disc is loaded, “Incorrect Disc”, “Region Code Error” or “Parental Error” will appear on the TV screen
according to the type of loaded disc. In this case, check your disc again (see pages 9 and 70).
• Some discs may take a minute or so to start playback.
• When you set a single-faced disc label downwards (ie. the wrong way up) and press OPEN/CLOSE or PLAY on the unit,
“Reading” will appear on the display for a few minutes and then “Incorrect Disc” will continue to be displayed.
• Some discs may not work the resuming facility.
• Resuming cannot function when you play a PBC-featured Video CD while the PBC is on. To turn off the PBC, see page 59.
• Some playback operations of DVDs may be intentionally fixed by software producers. Since this unit plays DVDs according
to the disc contents the software producers designed, some playback features may not be available. Also refer to the
instructions supplied with the DVDs.
• Do not move the unit during playback. Doing so may damage the disc.
• Use OPEN/CLOSE to open and close the disc tray. Do not push the disc tray while it is moving. Doing so may cause the unit
to malfunction.
• Do not push up on the disc tray or put any objects other than discs on the disc tray. Doing so may cause the unit to
malfunction.
• In many instances, a menu screen will appear after playback of a movie is completed. Prolonged display of an on-screen
menu may damage your television set, permanently etching that image onto its screen. To avoid this, be sure to press
POWER on your remote control once the movie is completed.
• There may be a slight delay between the button is pressed and the function activates.
• If the unit is not recording, the closed caption in the DVD disc can be displayed in the DVD mode.
To obtain a higher quality picture
Occasionally, some picture noise not usually visible on the TV screen during a normal broadcast may appear
while playing a DVD video disc. It is because due to high resolution pictures on these discs which include a lot of
information. The amount of noise depends on the disc you use with this unit. You should generally reduce the
sharpness adjustment on your TV when viewing DVD video discs.
About
DVD VCD CD
The
DVD VCD CD
icons on the heading bar show the playable discs for the function described under that
heading.
: You can use this function with DVD video discs.
VCD
: You can use this function with Video CDs.
CD
: You can use this function with Audio CDs and CD-R/RW CDs.
: You can use this function with USB Mass Storage.
DVD
VCD
CD
Basic playback
Playing a disc (Continued)
5V60101A [E]p51-54 2/22/06, 1:07 PM52
previous next