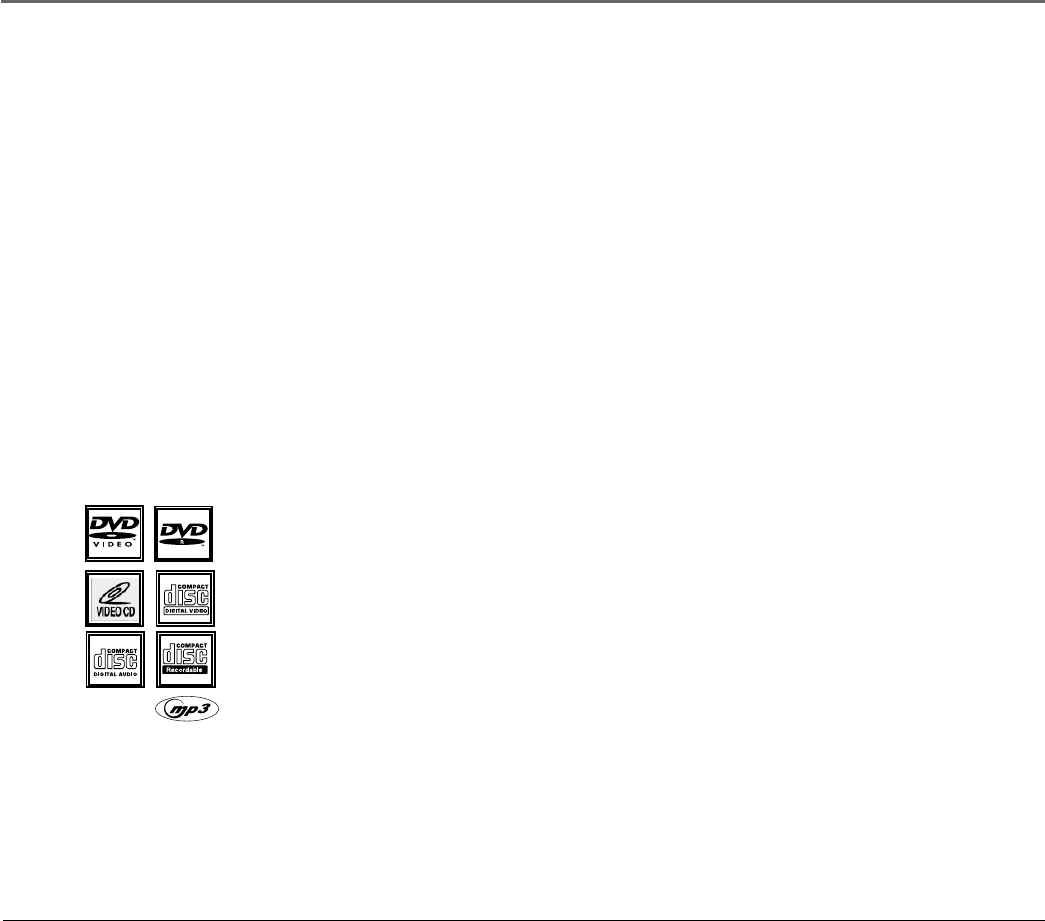 Chapter 2: Playing Discs
18 Chapter 2
DVD Basics
Regional Coding
Both the DVD player and the discs are coded by region. These regional codes must match in order for the disc to play. If the codes
don’t match, the disc won’t play. This unit’s code is region 1. Discs with other regional codes can’t be played in this unit.
Using Different Menus
Each disc is programmed with different features. There are two separate menu paths that you can use to access features: the disc’s menu
and the DVD’s status banner. Remember that a feature only works if the disc was programmed with that feature. For example, if you
choose subtitles, the subtitles only appear if the disc was created with subtitles.
• The Disc menu – The disc menu is part of each disc and is separate from the DVD’s status banner. The contents of each disc’s
menu vary according to how the disc was created and what features are included. Sometimes a disc’s menu appears automatically
when you insert the disc, or you can access it by pressing the MENU button.
• The DVD’s status banner – The status banner appears across the top of the screen when a disc is playing. It can only be accessed
while you are playing a disc. It’s turned on and off with the DISPLAY button on the remote.
Graphics and Illustrations contained in this document are for representation only.
Types of Discs Your DVD Will Play
•DVD discs and Video CDs – Contain video.
•Audio discs – Contain musical or sound content only.
• mp3 discs – Contain audio files (for example, a CD-R with downloaded mp3 files).
This DVD player is capable of playing the following types of discs: DVDs, audio CDs, Video CDs, and CDs with mp3 files. Before you
put a disc in the player, make sure it is compatible.
You can’t play the following types of discs: Laserdiscs, CD-I, CD-ROM (computer-only discs), DVD-ROM, discs recorded using other
broadcast standards (i.e. PAL or SECAM), or CD-G discs.
Note: Some discs may not be compatible due to laser pickup and disc design.
1628714C_2_Discs 8/27/04, 10:00 AM18
previous next